It is amazing to me that in one hand I can hold such a weighty document as the Constitution of the United States -- not hundreds or even thousands of pages, as some documents of law today. The small booklet, available from The Heritage Foundation, consists of only forty-some pages, is 3 1/2" wide and 6 1/2" high, and only 1/8" thick. But the words are weighty, and strong enough upon which to hang the rule of law for the entire United States of America. 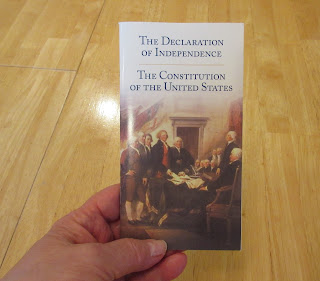 Despite the severe opposition to freedom for all races by some, the Declaration of Independence states, "We hold these truths to be self-evident, that all men are created equal, that they are endowed by their Creator with certain unalienable Rights, that among these are Life, Liberty, and the pursuit of Happiness. -- That to secure these rights, Governments are instituted among Men, deriving their just powers from the consent of the governed. -- " The document then proceeds to list the grievances of "repeated injuries and usurpations, all having in direct object the establishment of an absolute Tyranny over these states," and a multitude of unjust practices against the colonists by the King of Great Britain. 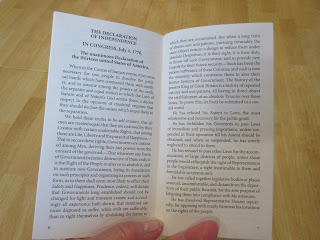 Our Thirteenth Amendment abolished slavery in the United States, and I am so thankful! Man was born to be free -- not enslaved by anyone or anything. Is anything unfair in our Constitution? No. But highly prejudiced courts and judges twisted the intent of the Constitution to render unjust, highly offensive decisions, such as in the Dred Scott vs. Sanford case, when Chief Justice Roger B. Taney did violence to the Constitution when he ruled that black people could not be made citizens. I cringe at such injustice! It seems the Constitution has always been at the mercy of men sitting on court benches, who by cunning and shrewd manipulation endeavor to extract decisions to suit themselves, and disregard the Constitution's intent.

When President Lincoln freed the slaves, Major General William Sherman gave forty acres of land and a mule in 1865 to freed slaves to provide them with means to start their own farms. But when Lincoln was assassinated, Andrew Jackson became president, and he reversed the orders! Such cruel injustice makes me both angry and sad. 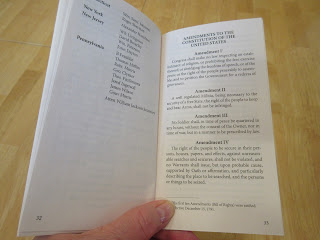 John Adams, a signer of the Declaration of Independence rightly said, "Our Constitution was made for a moral and religious people. It is wholly inadequate to the government of any other." He also said, "Let us tenderly and kindly cherish, therefore, the means of knowledge. Let us dare to read, think, speak, and write."

I pray much for our country, for the preservation of the original intent of our Constitution, for just laws to apply equally to all, regardless of skin color or creed. I pray much for our Supreme Court, that judges will be confirmed and appointed who will rule on decisions based on original intent of this small document I hold in my hands. May God have mercy on us as a nation, and help us to love one another.

Copies of the above booklet are available from The Heritage Foundation, 214 Massachusetts Avenue, NE, Washington, DC, 20002. Their telephone number is (800) 546-2843, and website is heritage.org.