My Journey to becoming A Published Author

We lived on Yorkshire Lane in Manassas, VA, and the year was 1991. One day I went to Yorkshire Market to get some groceries, and as I exited my car, I noticed a father and son near the entrance of the store. I was appalled as I saw (and heard) the father hit his son (who appeared to be about eleven or twelve years old), shove him toward the door, yelling at him saying he was no good, worthless, etc. His father hit him over the head as the boy cowered, trying to cover his head.
My heart pounded with high, mixed emotions. I wanted to run to that father and tell him to stop, and I wanted to put my arms around that young lad and comfort him and tell him God loves him and has good things for his life. Did I dare accost the dad? Should I say something? They disappeared into the store, and I don't recall seeing them inside anywhere while I shopped. I prayed, "Lord, what should I do? What can I do? How many families are dysfunctional like that? What can be done to bring change and help families? How can abused children know that such behavior is not normal, and it is not their fault?"
As I thought on my prayer, the idea came to write books for children that model a good, stable family life. The idea came to take a course in writing for children. Shortly thereafter I got an advertisement in the mail for a course from The Institute of Children's Literature from Connecticut in writing for children! (I didn't use a computer at that time, so I know I didn't search online for a course. It came to me in the mail!) I only had a manual typewriter that used corrector ribbon, but I signed up for the course, and enjoyed my instructor's helpful comments and encouragement. I still have my lesson submissions that he graded and returned to me! I wrote a few short stories and other things for my classes and got my certificate of completion on July 20, 1992. I also wrote in journals and notebooks, and I realized I was a teacher at heart. Then life got busy, and I put my writing aside for a few years. In 1997, my first grandchild, Alissa Rose, was born, and I was busy babysitting her for three plus years until her sister, Nicole Ann, was born.

(Alissa loved to hear me tell stories, especially the Bible story of Jarius’ daughter raised to life. Alissa lay on the couch and pretended to be the daughter, and I was Jesus, who came in and took her by the hand and said, “Little girl, get up!” Alissa asked for that story many times, and it was always a spiritual moment when we enacted it. She also loved to hear me tell of a little boy who got into trouble when he climbed a ladder, got into his father’s paint cans and made a mess everywhere.)

When I stopped babysitting Alissa, I really missed her, and remembered how she loved stories. So, I decided to write a story for her about rabbit family “children”, whom I named Biff and Becka. That first four-page story was titled “Biff and Becka Go to Town.” 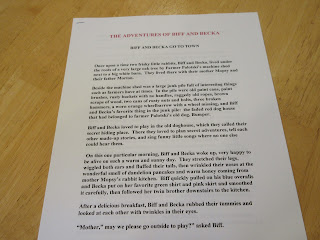 My first Biff and Becka story


Years passed, and I did other writing interviewing people and tried to find a market for my narratives. I did sell one article titled “The Angel That ‘Flied’” to Guideposts magazine; they bought my story for $300, interviewed the person themselves, and rewrote it to their satisfaction, and published it in Angels on Earth magazine; it made the cover story of their May/June 1997 issue, and was titled “Silent Words for a Frightened Mother.” (I felt they diluted the story by leaving out key components of how the mother prayed, but that’s another story.)

I tucked my writings away as I became a consultant with Home Interiors & Gifts and was quite busy doing home shows. Years passed.

Then one day in 2011 my friend Jane and I planned to have lunch. I wanted to give her a token of my friendship and thought about what to give her. She too had grandchildren, and I suddenly remembered the Biff and Becka story I had tucked away. I printed out a copy and gave it to her to read to her grand-kids. A few days later, she called me and said, “Elaine, you have to write more about Biff and Becka! It’s really good!” I was quite surprised, as I had no intention of writing more about them. To make a long story short, I began to put ideas on 3 x 5 cards and spread them out on the kitchen table to see how I might fit these ideas together to write another story. 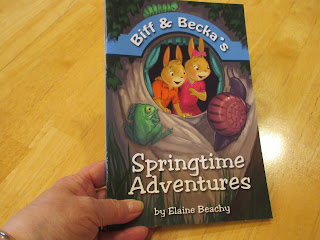 It developed from one story into an eight-chapter book I titled Biff and Becka’s Springtime Adventures, my first book published by Wine Press in 2012. Some months later I learned quite by “accident” that Wine Press was no longer in business! (It was truly a God thing!) I did manage to get Wine Press to return my manuscript, and I hunted for another publisher, deciding on WestBow Press, the assisted-publishing arm of Thomas Nelson and Zondervon publishers. I started over.

During this time, I joined a Christian writer’s group where I learned some helpful new things and decided to re-write and expand the first book to include more chapters, more adventures, and eventually titled it Biff and Becka’s Springtime Escapades. Because of my experience with Wine Press publishing, I had hired David Miles as my illustrator, because he did work for them. So, I had him draw new pictures, and I made the target audience for kids ages seven to eleven. Thus began my journey into writing my second and third books in the trilogy: Biff and Becka’s Stupendous Vacation, and Biff and Becka’s Splendiferous Christmas.

I was recently approached by a mother in our church who informed me that her daughter wanted me to write book number four about Biff and Becka! (My third book ended with the Christmas surprise for Biff and Becka that they were going to have a baby sister or brother.) She wants to know what will happen with the new baby in the family! Oh dear. Another challenge! We’ll see where it leads.

Since my third book published in 2015, I have also published a cookbook, Elaine’s Kitchen, in the fall of 2016, and more recently published Journal Gems: Nuggets from My Heart to Yours, all with WestBow Press. The editorial assessment for my next book, Rhyme and Reason: A Collection of Poetry and Short Stories, came back yesterday, so that book should soon be ready for distribution as well.

My journey into writing began one step at a time. I did a lot of praying about my writing, and I truly enjoy it. I feel like writing something every day—one way or another. I am always gratified to hear how my writing blesses others. As for the Biff and Becka trilogy, here is a quote from a friend:

“Elaine, you really touched my heart with the explanation of your desire to minister to abused children. I was one of those abused kids, as were several others in our class. We grew up distrustful, ashamed, feeling worthless, and taking the blame for everything that was killing our spirits. But I was a voracious reader as a child, and I read about “normal” families, and homes where children were valued and loved. It was just a dream to me, then, to imagine that there were parents who nurtured their children and taught them godly values. I knew there was a God but it was impossible for me to trust Him as a child. But many years later, with my own family, all that reading paid off. I knew what “normal” was supposed to be; I knew what nurturing and teaching godly values was all about BECAUSE I HAD READ ABOUT THEM when I was a kid.

So I know the good you are doing. And today, when child abuse is a much more openly talked-about thing, where there are resources for children, where there is mandated reporting of abuse, where teachers and other adults reach out to children they suspect are being abused, there is still that need for your books. You may have some idea of the good you are doing, but you don’t know it all yet, nor will you until you get to heaven.

Posted by Elaine Beachy at 9:00 AM